Among the Leaves, Fruit

Leigh Hunt was one of the first English authors I collected - after Samuel Johnson, of course. After you read Leigh Hunt's essay, My Books , you will understand why Luther Brewer and I love Leigh Hunt.

Luther Brewer not only collected Leigh Hunt, he wrote about him, and published books about Hunt under the Torch Press imprint. Almost every Christmas from 1912 until his death in 1933, Luther Brewer printed a book especially "for the friends of Luther Albertus and Elinore Taylor Brewer." I have a number of them, particularly the ones which pertain to Leigh Hunt. My most recent acquisition is the 1921 Christmas book by Vincent Starrett:

In the Preface of this book, Luther Brewer reveals the acquisition of a Leigh Hunt item that he didn't know existed. The book, an 1822 edition of "The Literary Pocket Book," was listed in a London catalogue, and contained poems and essays by Hunt.

In the first few pages of "A Student of Catalogues," Vincent Starrett relates that a bookseller, having sent Starrett a number of catalogues without receiving an order, queried Starrett: "Are you a prospective purchaser, or merely a student of catalogues?"

The Brewer-Leigh Hunt Collection is housed at the University of Iowa. This library has done much to preserve and promote both Hunt's works and Brewer's works. Additionally, the university has published several checklists covering the publishing history of Torch Press limited editions, which includes a list of the Torch Press Christmas Series.

In my library, I have a number of books by Leigh Hunt and Luther Brewer. I also have a book formerly owned by Luther Brewer: volume II of " A Book For A Corner" by Leigh Hunt. On the ffep is not one but two of Brewer's bookplates: His famous Leigh Hunt Bookplate and his earlier Inter Folia Fructus bookplate from 1892. 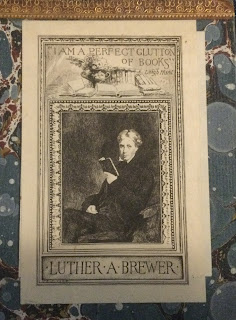 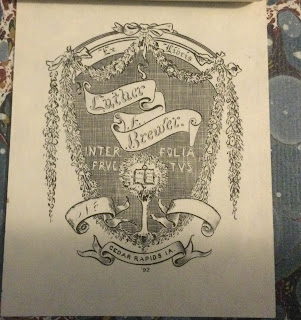 Yes, among the leaves, there is fruit.

Hello Jerry,
Nice to catch up with you.
Lew Jaffe
Http://bookplatejunkie.blogspot.com